The blockchain industry has been one of the most disruptive industries in finance in the past decade. Today, the industry has been embraced by large companies like IBM, Microsoft, Square and Robinhood. Many governments like Russia, China, and Iran are spending money to make developments based on the industry. In 2019, cryptocurrencies were the best-performing asset classes. The same is true with the past decade. Investors who invested in Bitcoin early on have seen returns north of 1000%.

Initial Coin Offerings (ICOs) have also become a popular tool for blockchain developers to raise money. In this article, we will look at the ICO process and what ICO Consulting Services is.

The blockchain industry has been one of the most disruptive industries in the past decade. Today, companies like IBM are developing blockchain tools that help global companies ship goods in a simplified manner.

What is a blockchain technology? The blockchain is a technology that allows digital information to be distributed but not copied. It is said to be a “time-stamped series of immutable records that is managed by a series of computers that are not owned by anyone.” The technology can help people and companies do things faster and safer.

There are many things that can be done using the blockchain technology. Cryptocurrencies is one of them.

What is a Cryptocurrency?

Cryptocurrencies have become the biggest products of the blockchain technology. As of this writing, all cryptocurrencies have a market value of more than $201 billion. To put this into perspective, these currencies are worth more money than General Electric, Twitter, and Target combined.

Cryptocurrencies can be traced to 2008, when the world underwent the biggest financial crisis in our time. This crisis was caused by financial companies that rushed to give out subprime mortgages to millions of Americans. A subprime mortgage is one that is given to people who can’t pay it back.

Banks gave out these mortgages and then created financial products known as collateralized debt obligations (CDOs) and mortgage backed securities (MBS). All this led to a sharp increase in housing prices. In 2008, some of the banks that had given out these loans started reporting huge default rates. Ultimately, this led to the collapse of Lehman Brothers and Bear Sterns. Other companies like AIG and General Motors had to be rescued by American taxpayers.

In the aftermath of this crisis, the level of distrust of government and government agencies was very high. People watched in anger as government bailed out the same Wall Street firms that had caused the crisis.

At the same time, a person or team, calling itself Satoshi Nakamoto, published the Bitcoin white paper. They proposed a digital currency based on the blockchain technology. Unlike fiat currencies, bitcoin would be an independent currency that is controlled by no one. It would also be difficult to track this currency, which means that it would promote privacy.

Bitcoin did not become popular instantly. It became more popular when it was adapted by dark web marketplaces like Silk Road. To many Silk Road traders, Bitcoin was the currency of choice because it allowed anonymous transactions.

Today, Bitcoin is one of the thousands of other cryptocurrencies in the market. These currencies come in all formats. For example, Ripple is a cryptocurrency that aims to simplify money remittances while Ethereum is used in smart contracts.

What is an Initial Coin Offering (ICO)?

The introduction of cryptocurrencies led to another important phenomenon that was known as an Initial Coin Offering. The ICO is a process that is aimed at removing the bottlenecks that exist in raising money. Before ICOs, the default method of raising money from the public was the initial public offering (IPO). In an IPO, companies publish their documents and then go in a roadshow to attract investors. The company then trades in an exchange, where buyers and sellers can trade these shares.

There are many challenges to IPOs. First, the company needs to be an established brand. Second, the IPO is limited to a certain geographical border. Third, regulators have put in place many regulations that in most cases prevent companies from being public.

An Initial Coin Offering is a process that aims to remove these bottlenecks. An ICO is a process in which developers come up with projects and raise money from people in all countries. Today, some of the most successful blockchain projects started as an ICO.

There are several differences between an Initial Coin Offering (ICO) and an Initial Public Offering (IPO). First, IPO is mostly done by companies that are already doing business. Some of the biggest IPOs in history are those of companies like Saudi Aramco, Alibaba, Facebook, and Royal Bank of Scotland. A company that is raising money using an ICO does not need to be in operation. In fact, most ICOs are usually based on ideas.

Second, the IPO process is a long one and tends to include many banks, who act as underwriters. There are other consultants like lawyers that are needed to carry out the IPO. ICOs are different. All one needs is an idea, a white paper, and a marketing budget. One can start and complete the ICO process within a few days. Still, it is recommended that you use ICO consulting Services to have a successful fundraising.

Third, IPOs are mostly national in nature. For example, it is very difficult for a retail investor in India to participate in an American IPO. On the other hand, ICOs are global events. Anyone can easily buy a stake in an ICO.

Fourth, IPOs are highly-regulated industries. In the United States, the securities and exchange commission (SEC) is tasked with overseeing the IPO process. The ICO industry is not regulated. This is the main reason why there are a lot of ICO scams.

In addition, in an IPO, the holders benefit when the share price moves up. As the company grows, the investors start making money using dividends. There are no dividends in an ICO.

Another difference between an IPO and an ICO is that companies are mandated by law to disclose many things to shareholders. For example, when the CEO buys or sells shares, they are required by law to disclose these issues. This is different for ICOs. The company founders are not obligated to release any information to investors.

Finally, in an IPO, companies are required to announce their revenue numbers every quarter. This does not apply in an ICO. 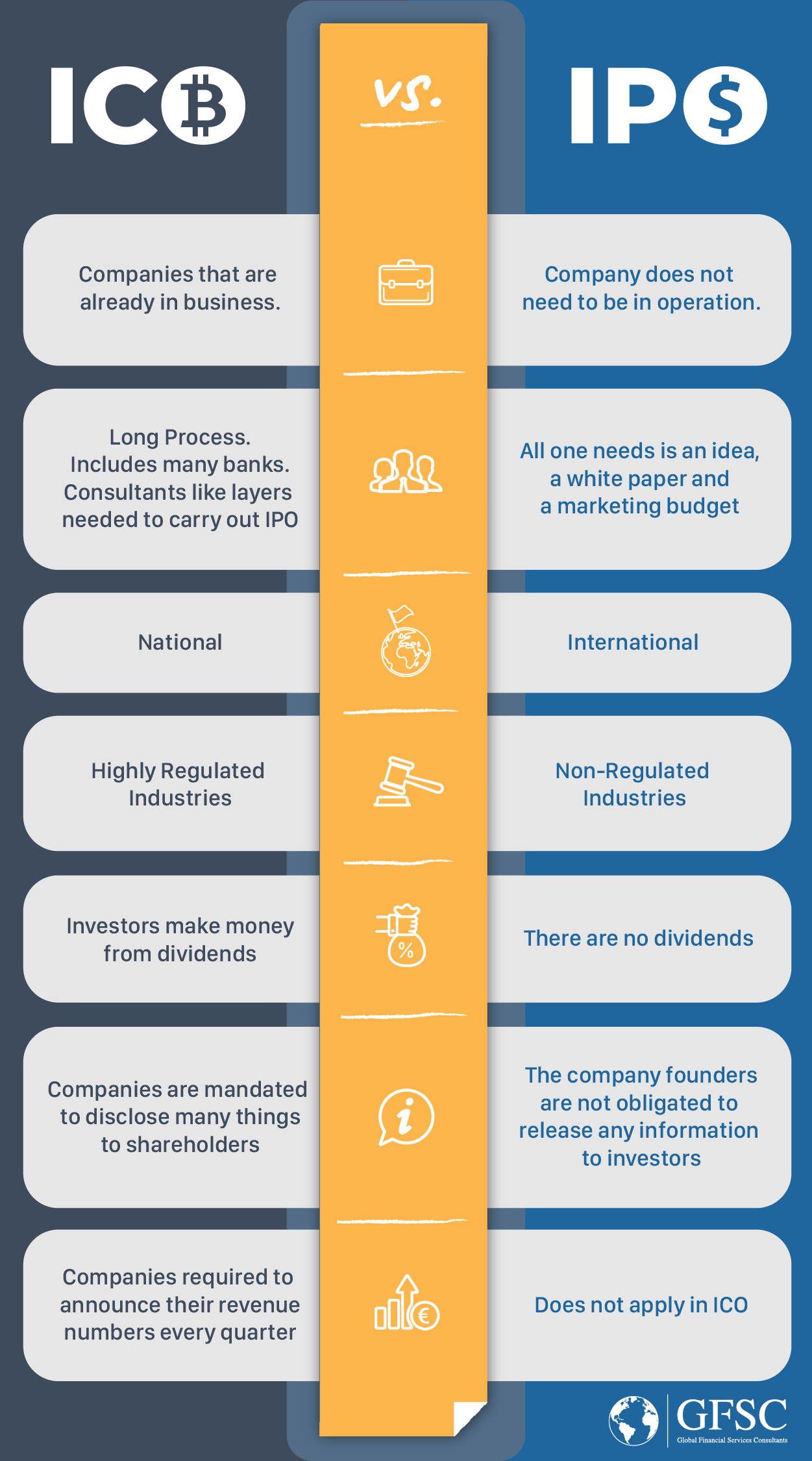 How an ICO Works

In the previous part, we have looked at what an ICO is. We have also looked at how it differs from an initial public offering. In this part, we will look at how an ICO works.

All ICOs start with a business idea. The developer studies the market and identifies a gap. They then come up with a method of solving this idea. It is important for you to consider whether the idea is viable or not. It is also important to see other companies that are in the industry and find gaps. It is important to note that there are some companies that are already in business that may opt to use an ICO instead of an IPO.

After coming up with an idea, you need to decide whether you want to do an ICO or fund the company yourself. If you decide to take the route of an ICO, you need to do a whitepaper.

What is an ICO whitepaper? An ICO whitepaper is a comprehensive document where you discuss the business that you are starting, the market you are targeting, and the strategy you want to use. The whitepaper can be compared to the form S1, that companies submit to the SEC before they become publicly listed.

The ICO whitepaper has a number of sections:

We recommend that you use a good ICO consulting services provider to come up with the whitepaper. A good example of a simple yet very effective whitepaper was published by Facebook, when it unveiled Libra. You can get the Libra whitepaper here.

After coming up with an ICO white paper, it is now important that you have an ICO website. This is a website that you will use to market and promote your project. Ideally, the ICO website should be designed well. It should also have a number of qualities such as:

A good and well-qualified ICO consulting services provider should be used to help you come up with such a website.

Search Engine Optimization (SEO) – This is a process in which the ICO consulting services use search engine optimization to promote the ICO.

After you raise money, you need to list your ICO in one of the popular exchanges. Your investors can now buy and sell the tokens in the open market.

After you raise money, you need to go ahead and develop the product. It is recommended that you continue updating the ICO holders of the progress that you are making.

The ICO industry has become one of the biggest in the blockchain industry. This is because of the vast amount of money that companies have raised using ICOs.

In the past few years, the total number of companies that have launched their ICOs has been increasing. In total, ICOs have raised more than $10 billion from global investors. Here are the biggest ICOs in the recent history.

Indeed, many of the companies mentioned above have been linked to scams. EOS was recently forced by the SEC to pay a $24 million fine for deceiving investors. Filecoin, which raised more than $200 million has been linked to crime. Telegram also found itself in trouble with the SEC.

However, not all ICOs are scams. The reality is that scams happen even in the most regulated industries. For example, a company like Enron became one of the biggest energy companies in the world. It was overseen by the SEC. The same is true with companies like Lehman Brothers and Stanford Financial Group. Investors lost billions of dollars when these companies went under.

What Regulators are Saying About ICOs

Regulators around the world were unprepared for the new age of blockchain technology. They are still unprepared for an industry that promises to upend the way the world operates. Generally, regulators such as the SEC and Finra have warned that there are risks of investing in ICOs. However, they have not come up with regulations that are meant to ban these ICOs.

At GFSC Global, we are the leading blockchain or ICO consulting service in the world. We have a team of veteran consultants and lawyers who have been in the industry for decades. We help our blockchain customers in a number of ways. We help them create intuitive and user-friendly websites, have quality whitepapers, market their services, have a virtual office, have a bank account in the European Union, and have all tools they need to launch their ICOs.